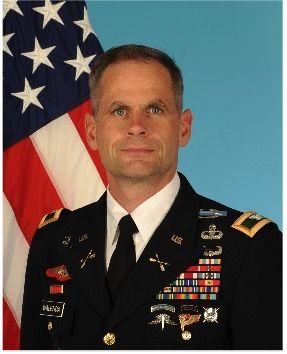 COL Gary A. Walenda was born at Fort Polk, Louisiana and grew up in Ellsinore, Missouri.   He was commissioned in May 1994 as a U.S. Army Officer (Infantry), from the United States Military Academy at West Point.

COL Walenda graduated from the Special Forces Qualification Course in 1999 and was assigned as a Special Forces Detachment Commander in the 1st Special Forces Group (Airborne), Fort Lewis, Washington.  He later served as Operations Officer at the Battalion and Group level, and Commander at the Company and Battalion level.  In 2015, he commanded a Combined Joint Interagency Task Force, and in 2017 he commanded Special Operations Command Forward – Yemen, both within the US Central Command Area of Responsibility.  From 2018 to 2021 he served as Chief of Staff for NATO Special Operations Forces Headquarters in SHAPE Belgium.  In August of 2021 he assumed responsibility as the Director of Strategy, Plans, and Engagements for Special Operations Command-Africa.