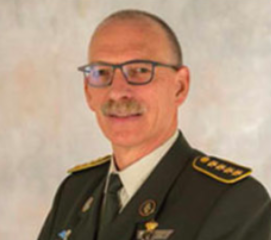 General Marc Compernol was born in Bruges on April 8, 1957. His military career starts in 1972 with three years at the Royal Cadet School in Laeken followed by his attendance at the Royal Military Academy where he graduates with the 130th Polytechnic Promotion obtaining a Master degree in Mechanics and Ballistics. Trained as Field Artillery officer in Brasschaat, Lieutenant Marc Compernol serves throughout various positions in the Airborne Field Arty Bty he would later command. During this command, his Battery participates in the operations Sunny Winter in Congo Brazzaville and UNOSOM II in Somalia.

From July 1996 to June 1999, Major Marc Compernol is working at the Army Staff, Plans and Programming Division. During this period he is promoted to Lieutenant Colonel in December 1997.
In June 1999 he takes command of the 2nd Regt Field Arty, stationed in Helchteren. After his period as commanding officer, he occupies several staff positions including Chief of the branch Operational Logistics within the Operational Command of the Army (2001), head of the "Synthèse" Division of the Army Staff where he is promoted to Colonel in 2002.