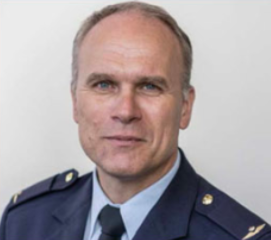 Vice Chief of Defence, Netherlands MOD
Onno Eichelsheim was born in Schiedam, the Netherlands, in 1966. He started his military career as a cadet at the Royal Netherlands Military Academy in Breda in 1986. After successfully completing basic flight training in 1990, he was awarded his helicopter pilot wings.

Until 1996 he served in a variety of operational positions as helicopter pilot with 299 Squadron at Deelen Air Base, during which time he was deployed to Bosnia. He subsequently served as deputy flight commander with the first Dutch Apache Squadron to train with the Unit Training Program in Ford Hood, Texas. Together with the US Army 21st Cavalry Brigade, he developed operational procedures in support of joint operations with the Dutch Apache. His work in Texas laid a solid foundation for the future establishment of the new airmobile brigade of the Dutch armed forces.

Back in the Netherlands, Onno Eichelsheim was assigned as flight commander of the Apache Squadron, and was deployed to Bosnia in 1999 and 2000. Promoted to the rank of major, he was put in charge of planning the first deployment of the AH-64D Longbow Apache detachment to Djibouti as part of the UN Operation UNMEE. He was subsequently assigned as Ops Officer to 302 Squadron, responsible for developing a new training course for Apache pilots and a training programme for joint operations with 11 Airmobile Brigade and the Commando Corps (special forces). His experience in joint operations served him well during his deployment to Kabul, Afghanistan, as detachment commander in 2004.

Serving in the rank of lieutenant colonel, in 2005 Onno Eichelsheim was assigned the position of commander of 302 Squadron, where he merged Apache squadrons 301 and 302, creating a new squadron with an entirely new organisational structure. He was also actively involved in the development of the Defence Helicopter Command. In 2006, he completed a tour of duty as detachment commander to Tarin Kowt, Uruzgan.

In 2009, Onno Eichelsheim completed several large projects, including replacing and modernising the Chinook, coordinating the budgetary requirements for the NH-90 and preparing a business case for the Defence Flight Simulation Centre. He performed these tasks as head of the helicopter section of the Directorate of Operational Policy, Requirements and Plans at the Defence Staff in The Hague.

In 2011 Colonel Eichelsheim became head of Helicopter Operations with the Air Force Command, where he was responsible for introducing six new CH-47F Chinooks and the NH-90. He was also charged with phasing out three older types of helicopter, including the Alouette III, and overseeing the certification programme for the Joint Netherlands Training Detachment (JNTD) in Fort Hood, Texas. In 2014, he served as commodore in the position of Director of Operations at Air Force Command headquarters. He has been deployed five times in his career: three times to Bosnia and twice to Afghanistan.

In April 2016, Onno Eichelsheim was promoted to the rank of major general and appointed director of the Netherlands Defence Intelligence and Security Service (NLD DISS). The DISS supplies intelligence and security information to top-level ministerial officials and the four operational commands of the Defence organization. Since July 2019, he has been Vice Chief of Defence in the rank of lieutenant general.